In his October letter, Hugh talks about his food. He is of the opinion that he was eating well while Jim is suffering from shortages. I wonder if their minds went back to the fare on board Samaria. The three menus Jim retained, one for each meal of the day, show that passengers had a wide and varied diet. On one side of each card is a colourful image of a Cunard White Star line ship. The one containing Hugh’s signature is for dinner and has a painting of Andania, as does the breakfast one. Aquitania is on the luncheon menu. 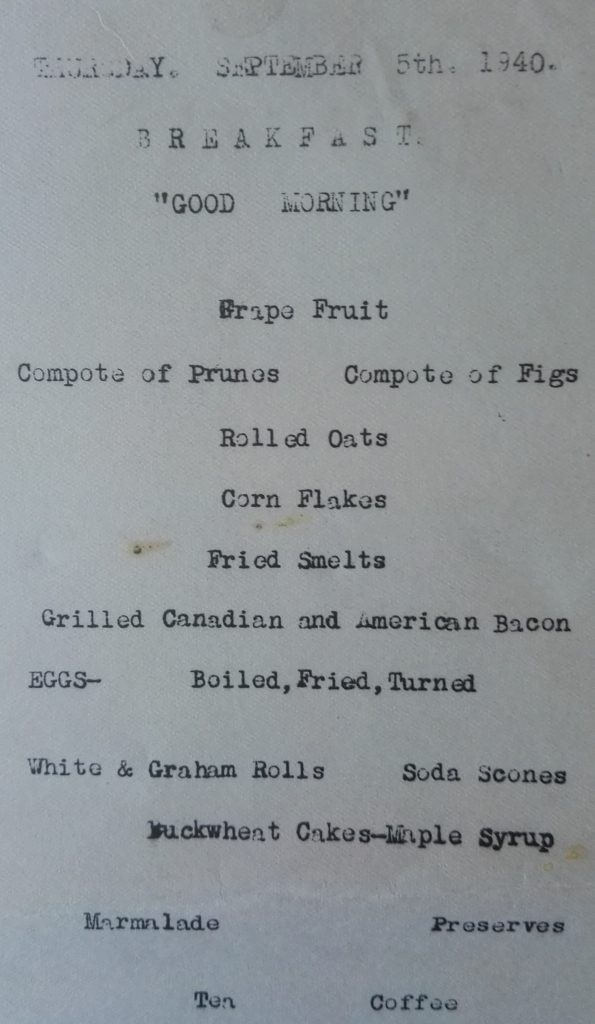 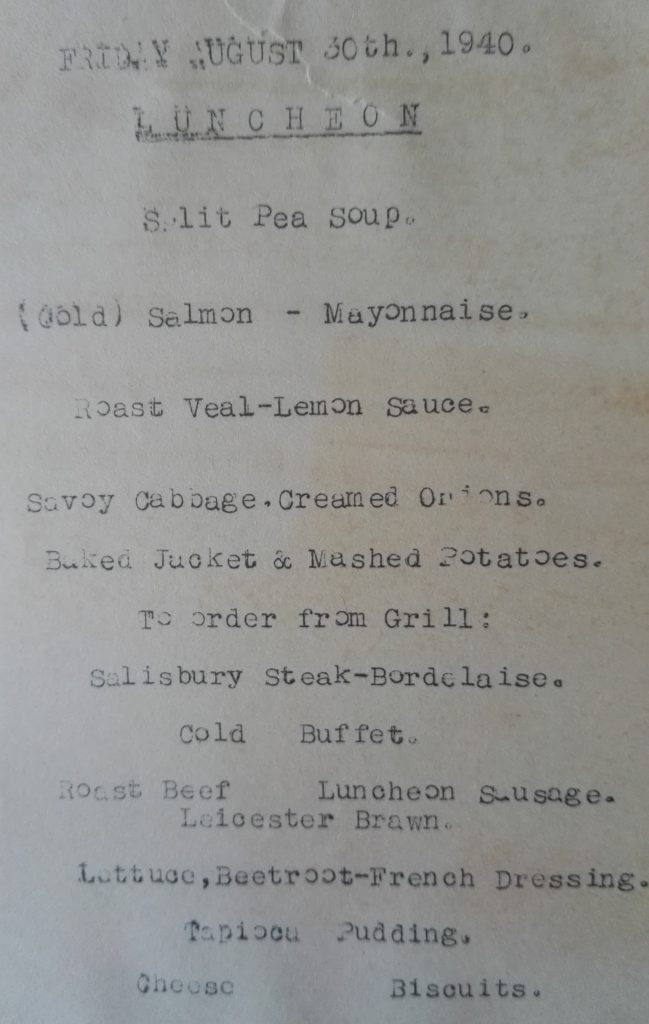 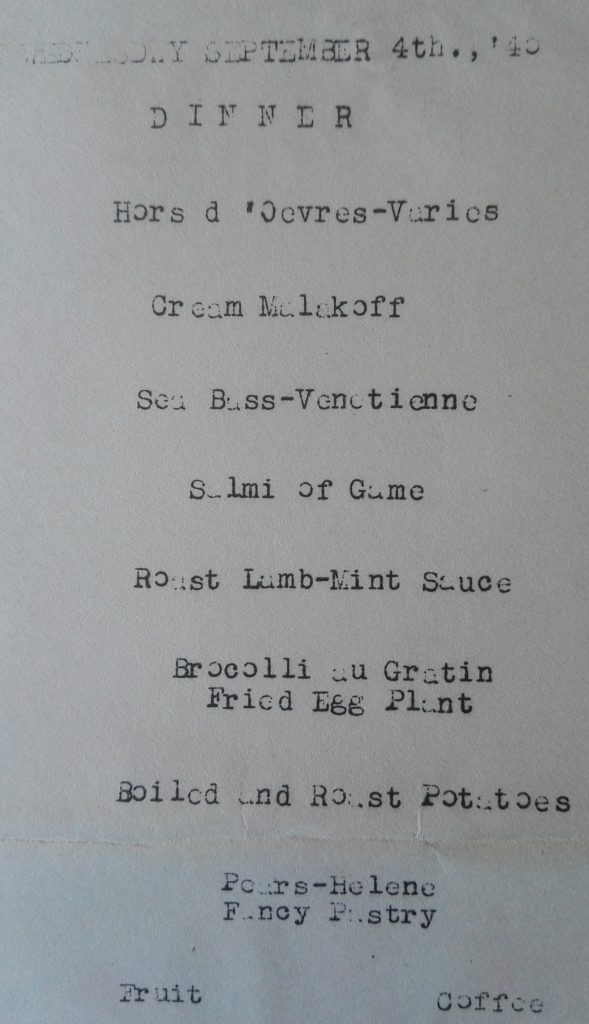 There is no evidence of rationing here. If Jim had thought further back to her meals in America, she would have remembered even more delights.

1940 Sunday July 14th We went to a cafe for brekker – Chelsea bun, grapefruit, coffee. At 12:30 lunch – chicken and ice cream very nicely served. They eat a kind of sweet salad with it.

Lunch that day at the height of Jim’s American adventure was at a private house and ended with coffee in the garden and conversation about politics and the war. On another occasion she was treated to calf’s foot jelly, roast chicken, afterwards rice, green peas, gravy, preserved walnut, soft buttered bread roll, sweet strawberry, cream and biscuit concoction, cigarettes.

The report for Hugh’s most recent patrol contains some information about what the crew were eating. The ‘victualling’ section describes one occasion when cucumber, tomatoes and three bags of potatoes had to be thrown overboard because they were too ripe.  It seems they had a plentiful supply. However, wasted food could not be replenished at sea. When the carbon dioxide machines were found to be defective, the list of food thrown away was much greater:

In England, the beginning of the year had seen the introduction of food rationing and Jim shows how she helped to eke out supplies both for the family and the livestock. Rationing of meat, cheese, jam and tea was already in place and clothing had been rationed since June 1. Freshly back from her voyage, she noted how the family was managing.

1940 21st October Onions have been 1/- per lb – to be controlled to fourpence-halfpenny. New luxury tax now in. Bus conductors 1/- per hour.

This was also the time of Jim’s purchase of a bicycle.  The family didn’t seem to suffer too much with their diet, especially when her younger brother and his new wife came to dinner- a return to traditional English fare after the meals in America.

1940 Nov 8 There is a terrific shortage of eggs in the country and the price is 3/6d – it seems very short-sighted of the Ministry of Food. 1. Told poultry farmers to increase stock then there was no food and the stock had to be killed. 2. Now eggs have to be sent to the packing station and it is not lawful to sell them privately.

Jim’s interest was due to her brother Rob’s poultry farm which of course provided the family with eggs. A few months on and Jim, like many others, was growing potatoes, comparing prices and bemoaning shortages of commodities. In a break with frugality, she shows how important her radio was for keeping up with the news.

Hugh’s next communication was a seasonal greeting. He sent it on November 14, hoping it would arrive before Christmas as indeed it did.

In the days when there was a postal delivery on Christmas Day, this could have been one of Jim’s first Christmas cards for 1941. This is the only clue to Hugh’s whereabouts in all his letters and gave me a lead as to his theatre of war.

According to The British Postal Museum and Archive, the airgraph service had begun in May 1941 with troops in the Middle East. Designed to ease communication between servicemen and civilians in Britain, it was also a way of saving postage. Air mail of ordinary letters was expensive and surface mail in the Mediterranean was vulnerable owing to the high presence of Axis forces. I learned that The message was written onto a special form that was then given an identification number and photographed onto microfilm. The microfilms could contain many letters and the weight per letter worked out at a tiny fraction of the equivalent hard copy. The microfilms were developed and posted to the recipient at the local destination. At first, this was a one-way service. Reciprocation began on August 15 but only for mail to the troops. The service was extended to other parts of the Middle East during the coming year and ceased from Great Britain in July 1945.

The flotilla in Alexandria

Hugh had spent the rest of October in Alexandria based on Medway and would have seen submarines such as HMS Torbay leave for their patrols. November began similarly with the hands kept occupied with cleaning and painting. Hugh had plenty of time to catch up on his letter-writing and his family would have been uppermost in his mind in the run-up to Christmas. Jim, too, may have been reflecting on the year’s events as she recorded details of yet more bombing. At all times Jim ‘listened in’ to the war news and reported what she found significant in her journal.

1941 Oct 20th It is now 9pm and we have just had a warning. 9:10 the guns are barking fiercely and I can hear bombs dropping. It is a bitter, bitter war. November 3rd Twelve cows were killed by Saturday’s raid at Raby.  Birkenhead and Bebington had it again.

During the year, the British navy had experienced heavy losses but the battle for superiority in the Mediterranean continued.  As well as providing escorts for the delivery of supplies to beleaguered Malta, submarines such as Osiris were patrolling the waters for enemy supply ships going to North Africa. The Allied successes of the summer months had been short-lived and Malta was suffering badly with heavy raids and little food.

On the morning of October 9, Osiris secured alongside Resource. This was an older vessel acting as a fleet repair ship. She began service in the Mediterranean in 1939 and also survived the war. On November 26, Osiris moored between Medway and Proteus. This submarine was resting in the midst of several patrols off Greece in which she sank a number of merchant vessels. She survived the war too. On December 2 it was Thorn that was on Osiris’ starboard side.  Thorn was launched by Cammell Laird in the March of 1941.

Living so close to the shipyard at Birkenhead, Jim witnessed a launch on at least one occasion.  The seed for travelling to America may have been sown in Jim’s mind in 1938. On July 28 she Saw the launch of the Mauretania. If she was near enough to Lady Bates, she would have heard these words:

This is a red-letter for Merseyside – the launch of the biggest ship that has ever been built in England. I hope that, like her namesake, she may work her way into the affections of all that have to do with her on both sides of the Atlantic. To the ship and all who serve or sail in her, I wish all good fortune. I name you Mauretania.

When Thorn rested alongside Osiris at the beginning of December, she had arrived recently at Alexandria at the end of her 2nd patrol and would not start the next for another fortnight. She went on to carry out more patrols, during which she made many successful attacks. She failed to return from her 8th patrol in August 1942.

A few days later, Osiris carried out small manoeuvres within the harbour until securing her starboard side alongside Medway once more. On the afternoon of the December 9, Osiris moved from Medway to No 2 Buoy spending the night with bows pointing west. Early next morning, returning to Medway, the men found themselves adjacent to Thunderbolt which had just returned from her 9th War Patrol.

One can only imagine the camaraderie amongst the men and how they exchanged stories of past victories. There were also tales of danger and narrow escapes. In what frame of mind they faced the non-return of a boat, we can only guess. If his letters are anything to go by, Hugh remained optimistic.

December 10th was a stormy day. By 7:30 in the evening, the wind had increased to force 6. Osiris was tossed about so much that eight pints of spirit were found to be lost the following afternoon. The log book states that this was due to the jar being broken in rough weather. On the evening of the 10th, Osiris anchored in position 119 degrees Ras el Tin Lighthouse.

In Egypt, the origin of so many famous beacons, Ras el Tin stands at the western end of the peninsula of the same name, protecting vessels entering and leaving Alexandria. On this occasion, the crew frequently checked the position of the anchors in the face of the rough weather. They started at 0625  to return to a location between Medway and Thunderbolt.

On December 11, Osiris was occupied in sea exercises. Leaving Medway at 0737 they passed the boom at 0807 and the Great Pass Beacon 0840. Following a dive at 1108, the starboard muffler valve began leaking badly and they surfaced at 1126, returning to harbour at noon. Three hours later they secured alongside Medway on their port side and adjacent to HMS Triumph which had returned to harbour that same day after her 20th war patrol.

This was the day Germany and Italy declared war on the United States.

For the crew of Osiris, a rest period began. This included the unusual task of providing electricity for salvaging a battleship. HMS Trusty helped in this. The following morning saw the boats side by side with Osiris against Medway on her starboard side. Soon afterwards, Trusty departed for service in the Far East. She survived the war. December 14th was a Sunday and Hugh settled down to catch up on his letter-writing.